The Revenge of Lord Eberlin by Julia London 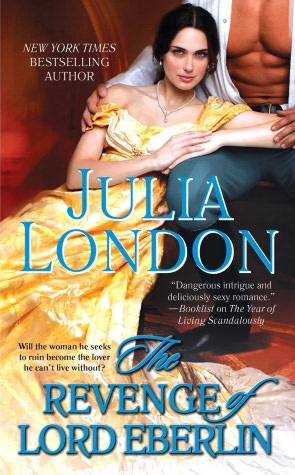 Returning to Hadley Green after fifteen years, the young Lord Eberlin has but one goal in mind: to avenge the death of his father. But when he is reunited with the beautiful target of his smoldering wrath, his plans take an unexpected turn. . . . Tobin Scott has not been back to Hadley Green since Lily Boudine’s childhood testimony helped send his father to the gallows for stealing the valuable Ashwood jewels. Now a wealthy man, he intends to exact his revenge by destroying Ashwood and its lady. He offers Lily a choice between her life and the livelihoods of the people who depend on the estate. She chooses the former, certain she can hold his dangerous plans at bay. Lily and Tobin’s game of one-upmanship quickly becomes a delicate dance of seduction, and she realizes he is not the cold, heartless man he tries to seem. In fact, she is certain he is right—his father was innocent. Together, they set out to find the jewels that will restore his family’s honor, and soon their unbridled passion uncovers a shocking secret that will change their lives forever.